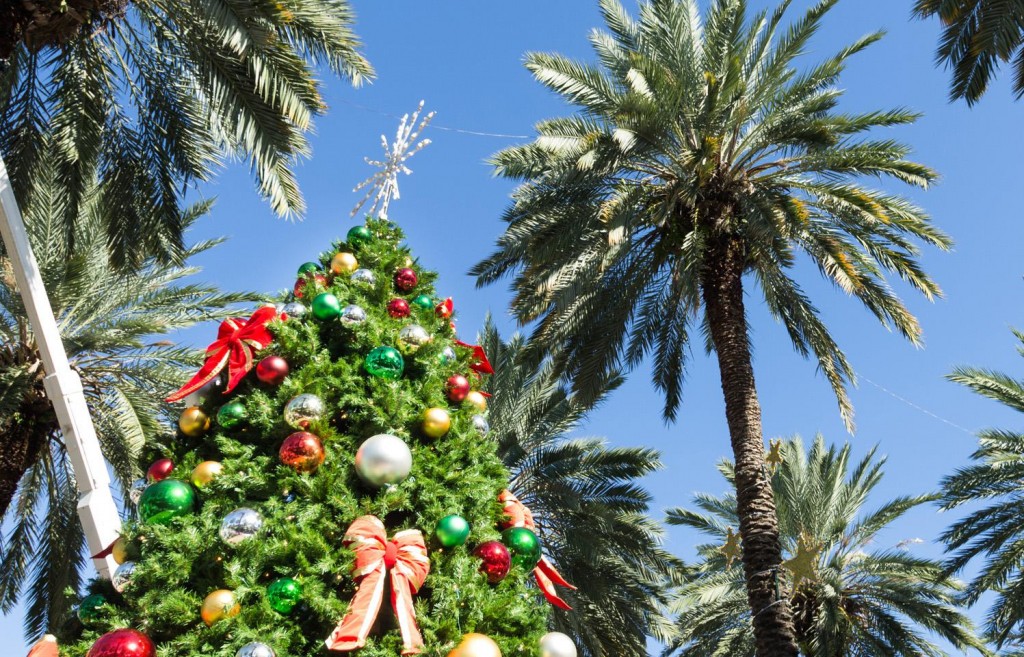 While much of the country looks forward to snow and sleigh bells, yuletide in the 305 promises sunshine, frolicking in South Beach and parties at every turn—from Key Biscayne to Coral Gables to downtown Brickell. Overwhelmed by the number of things to do in Miami? Relax, put on some Christmas tunes and peruse our list of the best Christmas events in Miami.

The Miami Seaquarium opens its doors after dark for the 41st edition of Kiwanis Club of Little Havana’s annual Christmas gala. Your ticket buys you unlimited cocktails from a Bacardi open bar, food from local restaurants and access to performances by salsa legend Rey Ruiz, Grammy-winning musician Marlow Rosado alongside la Riqueña, SonLokos and many others. Proceeds from the event, hosted by iHeart Radio’s Enrique Santos, benefit the club’s holiday project, A Toy for Every Child.

Kurtis Blow, the pioneer responsible for the first gold-record rap song, acts as MC and electric violinist during this transposition of the classic E.T.A. Hoffmann story to 1980s New York. Jennifer Weber’s choreography brings a new audience to Tchaikovsky’s music, thanks to remixed hip-hop interludes.

A Christmas Carol, The Musical

Introduce the kids to Tiny Tim and the Cratchit clan via a musically charged adaptation of the festive holiday classic. Special lap tickets are available for tiny audience members (children 12 months and under).

Enjoy three days of screenings in December as Time Out Miami turns two of the city’s finest breweries and bars into exciting seasonal pop-up cinemas. There’ll be screenings of your favorite Christmas movies, there’ll be drinks, and there’ll be no excuse not to round up your friends and join us at these movie parties where we’ll be ringing in the season in style. We’ve picked three of the most loved modern holiday movies to share with you: Home Alone,Elf and National Lampoon’s Christmas Vacation.

Spend an evening strolling the grounds, specially decorated for the holidays just as they would have been 100 years ago when James Deering called the museum home. Wander through the Main House after dark (an opportunity that comes but twice a year), gather round the organ for traditional holiday tunes and celebrate the season with complimentary cocktails and sugary treats.

Sights and Sounds of the Season

Listen to Christmas carols and festive holiday songs from around the world performed by the renowned New World Symphony, under the direction of conductor Dean Whiteside. This year’s program includes selections from The Nutcracker and ‘Twas the Night Before Christmas.

For 27 holiday seasons, Miami City Ballet has been producing an identical version of the Balanchine/Tchaikovsky fairy tale. This year, the company reinvents The Nutcrackerwith brand-new sets and costumes. The purists, meanwhile, can put down the pitchforks: It’s still Balanchine and it’s still Tchaikovsky.

Sing your favorite holiday tunes up and down Lincoln Road, and wind up belting out songs over cocktails. The festive event kicks off at Segafredo and continues through the illuminated outdoor mall with stops at shops along the way.

The world’s largest holiday theme park (at least according to the website) returns for its 35th season with more shimmering lights (more than two miles of bulbs!), bigger carnival rides (including the tallest traveling Ferris wheel in the United States) and only-in-Miami experiences. The county-fair-meets-winter-wonderland is chock-full of amusement rides, carnival games, photo ops with Santa and his helpers and an assortment of fair food—think fresh doughnuts, funnel cakes and more.